Fun and Robbie Williams were entertaining. Just as well as the sight of James Arthur taking part in the intro sing-a-long was not pretty. Robbie was quite remarkably good and the brief run through of his past hits was a salutary reminder of how Kye hadn't really done a great deal with his efforts at Let Me Entertain You. In the middle of his performance of Candy, his brilliantly commercial current single, Robbie shouts out his support for Rylan. That must have made the guy's week.

The votes won't have made Union J's week, as they found themselves in the bottom two, much to everyone's surprise. Every judge and commentator had expected a group but it was District3's useless performance that was supposed to have been the dud, not Union J who, whilst not exactly inspiring, were far better. 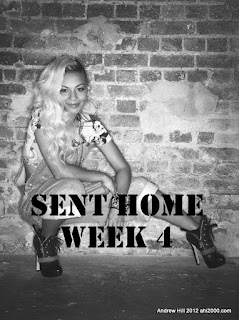 Jade was the much predicted other low vote recipient, deservedly so after a very strange song selection. She might have rescued herself with a careful and excellent sing-off track had she been up against anyone else than Union J. She wasn't though and so didn't.

She was likely to go in the early weeks but I had expected her to survive longer. Once again, it is abundantly clear that the people voting are still an entirely different mix to those commentating, with Old Baloney through yet again.

Next week it's Number One's Week which, unfortunately, could be up Old Baloney's voting supporters' street. Anything is possible, with such a vast range. So who'll be doing Firestarter?