Sometimes it's more interesting to watch the odds than the contestants... 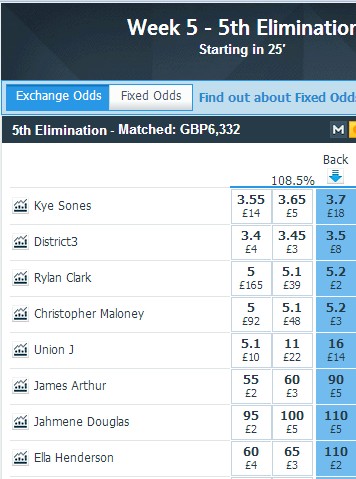 Looking at Betfair's odds, there is little to choose between four acts vying for elimination in Week 5.

Assuming that the show does, indeed, go on as usual after Lucy's exit, District3 and Kye are the two expected to have to sing off. To be honest, though, Rylan and Old Baloney are only a whisker less fancied in that respect.

So, as someone has bound to have told them, expect them to make a particularly special effort to survive.

At the other extreme, fortunes would be made should any of Ella, Jahmene or James go home this week.

Of course, so far the bookies' favourite to go - even after they've sung - has survived each week and it's been punters' 4th choice that's gone. At the time of writing that would mean Old Baloney goes at last!!

We can only hope.