Rylan kicks off in fine Essex style, including a clip of Amy from TOWIE training Nicole in the local habits. We then get him crashing through some sugar glass out of 'Rylan's Boutique' for some reason best known to whoever staged this. He actually sang pretty well, though and is certainly entertaining. I can imagine him getting through for another week with that.

Union J do the Taylor Swift Love Story track and make a reasonable job of it. Good choice, Louis. Slight shift of lyrics needed and it's a pity the show expects each individual band member to have his own 'slot' as they'd be better with one clear lead and the decent harmony the others can produce on tracks like this. Still, that should see them safely through.

Kye next. He's vulnerable tonight. He was before he started and certainly will be after some quite desperate effort there. He tried hard and there were mostly good notes and the upper ones were welcome but then he tried to do what stars do by high fiving the judges and prancing around oddly. That didn't work at all and he really showed his inexperience. Pretty poor.

James did No Doubt and started well but then started rapping and seemed to be struggling not to swear, It may have worked for his fans but you did get the impression that he was trying just that little bit, no, hugely actually, too ruddy hard.

Ella. Firework. No explosions. That worked very well, apart from some high notes that she doesn't seem able to manage. I could have sworn she managed notes perfectly before but this wasn't 100%. She's still favourite to win but I'm not so sure.

District3 get girls. Quite a fun number that I thought worked OK and they did a pretty reasonable job. The judges didn't, though, apart from Louis, of course. That'll be one for their fans to decide, I guess, Are there enough of them to keep them safe this week or are the bookies going to right for the first time?

Jahmene performed something I didn't recognise at first. It was a bit of a mess and he put some runs in where he couldn't quite make the notes and kinda got away with it. He's safe enough I should think, as he gets some of the Granny vote too but he needs to pick something more appealing and manageable next time.

Old Baloney. All By Myself. Wish he were, somewhere far away from my TV. Dreadful.

Let's see how the odds finished up at the end of the show. 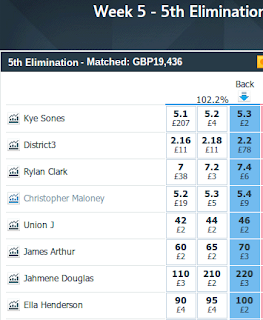 Hmmm.. it looks like District3 v Old Baloney tomorrow night. At least there's a chance of getting rid of him after all. Even more fun would be Kye v Old Baloney.
Posted by Andrew Hill at 22:03