Week 6 One of these has to go tomorrow

And here are the odds half an hour before the show starts. There hasn't been a predictable elimination yet and, despite Rylan and District3 being heavily fancied (again!) I'm not so sure. District3 escaped the bottom 2 last week and they will be trying extremely hard to get back in the competition which has largely gone Union J's way so far. Who goes could vary depending upon who they're up against. There aren't that many combinations really. 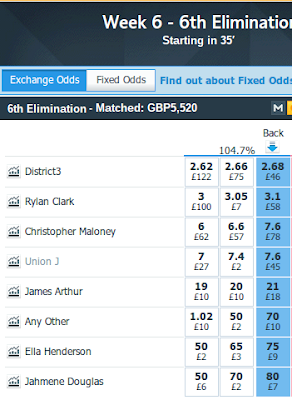 Ella, Jahmene and James against any others would survive.
Union J would survive against Rylan or Baloney but could conceivably tumble out against District 3 (bearing in mind that for the two groups to be in the bottom two would mean they've both under-performed so it could be anyone's guess from there).
District3 would beat Christopher as I think they'd get Tulisa and Nicole's votes. I suspect they'd beat Rylan too needing only one of the girls to support Gary and Louis.
That leaves Rylan v Old Baloney. Only Gary would vote for Old Baloney which would also see him gone.

So all that would mean goodbye to Old Baloney if he ends up in the bottom two. That's a big if.

Email ThisBlogThis!Share to TwitterShare to FacebookShare to Pinterest
Labels: #xfactor